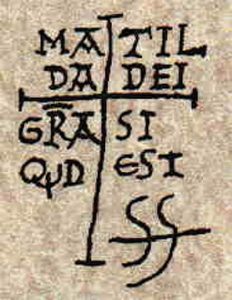 The history of Traditional Balsamic Vinegar of Reggio Emilia stretches back over more than 900 years, until 1046, when Henry IIItravelled to Italy to be crowned Holy Roman Emperor. On his way to Rome he stopped off in Piacenza, where he had a large number of gifts sent to Boniface III of Tuscany, the father of Mathilda, in exchange for the priceless balsamic vinegar he had heard tell of.
We are told of the encounter by the Benedictine monk Donizo, then resident in the monastery of San Apollonio di Canossa, in his work “Vita Mathildis”:
“…E mandò a Bonifacio diverse sue cose nuove, perchè voleva di quell’aceto che gli era stato lodato e che si faceva nella rocca di Canossa. Il duca ordinò di fabbricare subito, in argento, una botticella…”
(“And he sent a number of new belongings of his to Boniface, because he wanted some of the vinegar that wonders had been spoken of, prepared in the Castle of Canossa. The duke immediately ordered a small barrel, crafted in silver….”
This is the earliest historical document that mentions balsamic vinegar, from which we know it was much appreciated and jealously guarded in the far-off courts of northern Europe.
9Thereafter, with the advent of printing, which replaced the amanuenses and the oral tradition, there are increasingly frequent references to this noble, highly esteemed product.

Ludovico Ariosto also mentions it in the third satire to Master Annibale Malagucio, his friend and cousin: “… mi sa meglio una rapa ch’io cuoca et spargo poi di aceto e sapa…”. (I’d rather have a turnip to cook, and spread it with a little vinegar and must…)
Throughout the Renaissance and the Baroque period, mention of a barrel or two of vinegar can be found in numerous notarial deeds or simple lists regarding marriages or successions, indicating that it was considered an item of sufficient prestige to be inherited or offered as part of a dowry.
Considered beneficial to health during major outbreaks of disease, it was used to combat miasmas and infective agents, so anyone who could afford to kept it with them at all times.
In the 18th century, it could be found on the dining tables of many royal courts in Europe, and it was much appreciated and described by a large number of illustrious names, such as Mitterparker of the University of Buda, who drafted a textbook for students of agrarian sciences in which he describes a method for producing balsamic vinegar, or Filippo Re of Reggio Emilia, who explains a similar method, using red-hot tiles, or Count Giorgio Gallesio, who writes of the vinegar factories of the Counts Salimbeni in Nonatola, indicating the recipes used.
It was not until the 19th century, with Pasteur, that we began to learn more about the biochemical composition of balsamic vinegar.
These initial studies would later be developed further in Bologna, thanks to experts such as Fausto Sestini, Ernesto Parisi and Mario Sacchetti.